The Kids are Alright

01 May The Kids are Alright

Posted at 13:43h in Uncategorized by Kaskade 0 Comments
0 Likes 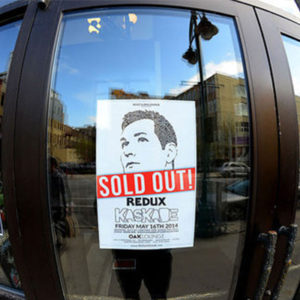 Redux. Twelve intimate shows where I would work to pull everyone on a journey into the past in some dark room with deep swirls of music. This was the concept. In my mind, before it all happened, the clubs would be filled with the heads that supported me early in my career. The friends and family who had been there for the entire ride.

But the reality was different; the old school was accompanied by an audience that was young and vibrant. It was diverse. The new kids showed up. Shoulder-to-shoulder with each other, the old and the new. And yes, some of the new guys showed up with glowsticks and invited the wrath of the Guardians of Redux.

“They are not real fans.”

“They don’t know the music.”

True, some of the newer kids looked a little puzzled, waiting for something to kick in that would not be kicking on that Redux night. But for the most part, they were all singing along to the old jams like “Stepping out” and “Everything”, as much as “Last Chance” and “Atmosphere”.

It’s the oldest pattern in the book. You’ve put your time in, and when the young ones want to be part of it, they’re not let in easily. There’s a velvet rope they have to negotiate. They’re told they’re doing it wrong, they don’t have the respect, they are ruining it. They’re always told they don’t get it. They couldn’t possibly because they haven’t been there from the start.

But what I see is that they’re not doing it wrong, they’re just doing it differently. The audience just arriving to this music is feeling our influence and sure, there are some weirdos. But listen. I just traveled to major metropolitan areas as well as some more rural places, and played a bunch of Redux shows for these guys.

The kids are alright.

At each Redux show, the new fuzzy-boot-wearing kid got down just as hard as the Brooklyn-style hipster and that’s a beautiful thing. Music brought them together. From my vantage point, the smiles and bobbing heads look equally passionate, regardless of how many years they’ve put in.

I get a lot of satisfaction going to these small clubs (and nearly passing out from dehydration). I love being in it. You see me dancing, moving and feeling it. It’s not an act. I could not phone that in, night after night if it wasn’t the truth. When everyone gets on the same page and we all get there together, I honestly do not care if it’s your first night or one-hundreth show. When it’s on, when it’s working? Magic.

Redux 2014 is done. No gimmicks, just good music and some space and time to pay respect to how we used to do it. There were bumps along the way. Scalpers, some dodgy sound systems, a few overly aggressive fans. But for the most part, the cross-section of people who showed up were my dream scenario.

This music is at its core about diversity and acceptance. Not haughty tolerance and judgement. The message has always been about love and all the things that peel off from that. We can sustain an infinite amount of people. Music will not wear out, it does not decay. Nobody has to earn their way in, and if Redux does it for you? Come on in, and welcome to the deep end.